In yesterday’s post, I talked a bit about the setup process and initial configuration of a Particle Photon. To start quickly, we used the Tinker firmware and the Particle iOS app to light up a LED using digitalWrite to light it up with full brightness (full 3.3V) but also with analogWrite to vary the brightness depending on the value you write (between 0-255 using the PWM port D0).

For the photoresistor, I only had a Grove Light Sensor lying around. If you don’t know the Grove system, it’s a a collection of sensors with simple four-wire connectors that typically work with an add-on board for these connectors. For the Photon, there is such a solution as well. To get started easily you could go for the starter kit: https://www.seeedstudio.com/Grove-Starter-Kit-for-Photon-p-2179.html. Since I do not have the Grove add-on board for the Photon, I connected the sensor using three male-to-female (two for power and ground and one for the signal) wires and connected the signal pin to port A0 on the Photon. Indeed, the photoresistor will output a value to read using analogRead. The value rises with increasing brightness.

So how do we turn on the LED from the Particle Cloud? That’s where Particle Functions come in. Particle Functions make it extremely easy to control your device from anywhere. In fact, it’s one of the easiest solutions I have found to date. But first, you have to know something about the integrated development environment called Build.

You access the IDE from https://build.particle.io. The screenshot below shows the IDE with a new app ready to be coded:

If you are used to Arduino, it all looks pretty similar here but beware there are many subtle differences. The cool thing is that you can code your app here and flash the device from the Web using the flash icon in the top left. Let’s write a simple app to flash a led at port D1: 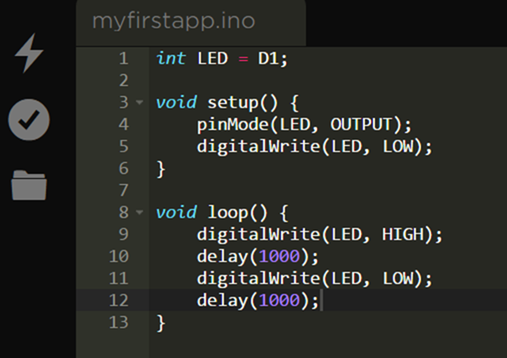 Okay, cool but not very interesting. Let’s put this LED under cloud control with a function.

Let’s write a Particle Function that can turn the LED on or off remotely. 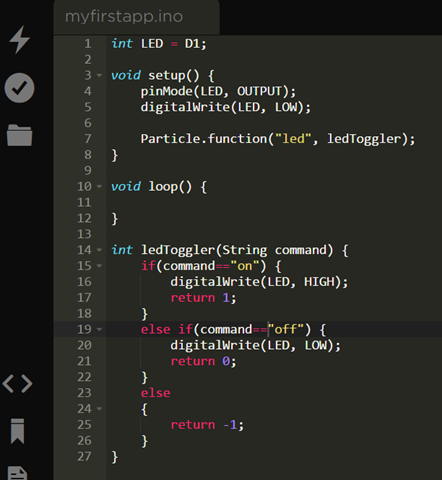 The CLI is easy. After installing it (see https://docs.particle.io/guide/tools-and-features/cli/photon/), just execute the following command to see your devices and their functions: particle list (note: use particle login first to login with your Particle account)

Above you see two calls to turn the LED on and off. After each call, you also see the return value of the function.

To use the HTTP POST method, there’s a myriad of tools and frameworks to do so. From the command line, you can use cURL but you could also use Postman. I use cURL on Windows, which is part of Git Bash. You can also try https://curl.haxx.se/download.html. With cURLyou need to supply your device ID + an access token you can get from the IDE:

Above you see the same two calls to turn the LED on or off. The HTTP POST returns some JSON with the return_value from the function.

Functions are great to trigger actions on your devices, but how do we read data from a sensor like the photoresistor in our case? That’s surprisingly easy again: just use a Particle Variable. Modify the code as follows: 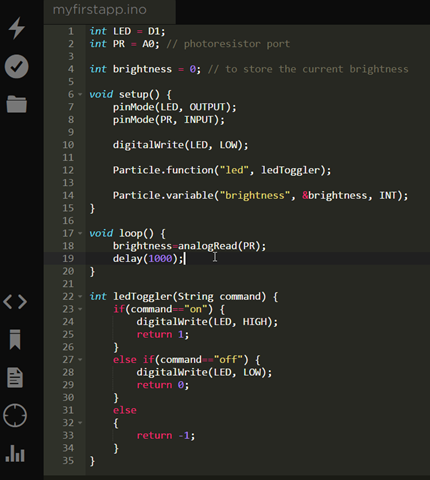 Above, the A0 pin (called PR) is setup for reading values. In the loop, we keep reading the brightness from the photoresistor using analogRead followed by a delay of 1 second. A Particle Variable is defined that you can read from the cloud using the CLI or HTTP GET. With the CLI:

Without the LED above the photo resistor, inside the house, we get 1485 as a brightness value. With the LED turned on right above it, the value is 2303. Great!!! By the way, the LED is not too bright because I used a 1000 Ohm resistor.

You have now seen how easy it is to trigger actions with Particle Functions and read sensor data using Particle Variables. This functionality automatically comes with your Particle device at no extra cost and is completely driven from code. There is no need to use other services to post sensor data which keeps things simple. And I like simple, don’t you?

At ThingTank, the IoT brand of Xylos, we make our own IoT hardware which can be quite complex if you need to connect multiple sensors efficiently, or even multiple MCUs where each MCU has its own set of sensors. Most people that want to start with IoT (typically at home or for a small company proof of concept) use either Arduino or Raspberry Pi with one or two sensors connected. Both solutions are great in their own right but there are others! One such solution is Particle, a combination of both hardware, software and cloud. Let’s take a look at what they offer from a hardware and configuration perspective. Future posts will discuss their cloud offering and how to connect to other systems such as Azure IoT Hub.

Particle sell their own hardware (like the Photon and Electron) but they also work with other hardware such as a Raspberry Pi. I bought a Photon from https://www.antratek.be/photon. It costs around 25€ which is not as cheap as some alternatives but still well worth the money. 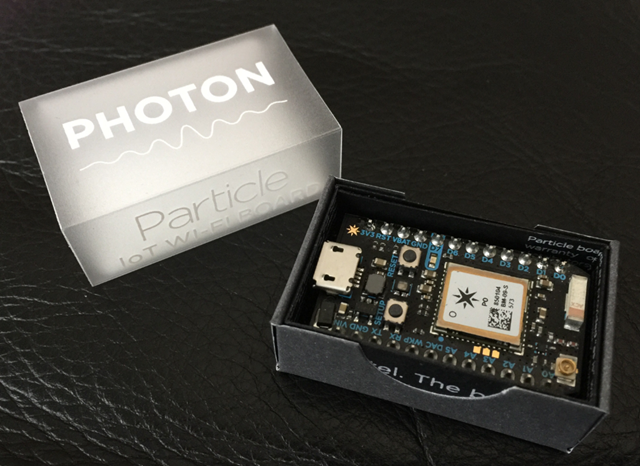 After unpacking, I mounted it on a breadboard and gave it power from a wall socket using an adapter I had lying around that I used in the past to power a Raspberry Pi. Although you can, you do not have to connect the Photon to a computer to configure it. Yes, you heard that right! You can configure the Photon using a mobile app and you can flash new firmware OTA (over the air) right from a web-based IDE called Build. Let’s see how initial configuration works…

The Photon only comes with WiFi, compared to the Electron which comes with 2G/3G and a global SIM card. To connect the Photon to WiFi (one of five connections the device can remember), use the Particle app for iOS or Android (the easiest method): 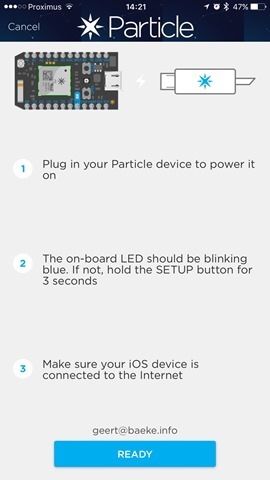 To configure a new device, the app guides you through the whole process. The Photon will create its own WiFi network. After connecting your phone to that network, you can configure the network you want the Photon to connect to: 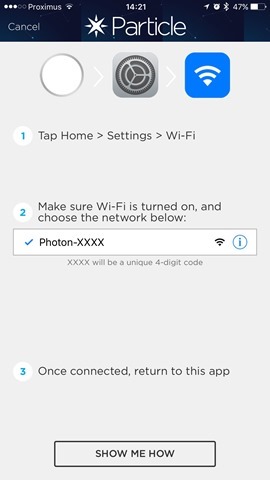 When the process is finished, the device can be seen in the Particle Console:

As part of the configuration process, you can give the device a name. The device name (or device id) can later be used in HTTP calls or from the Particle CLI.

In the mobile app, after selecting the device, you will see the port layout of the device: 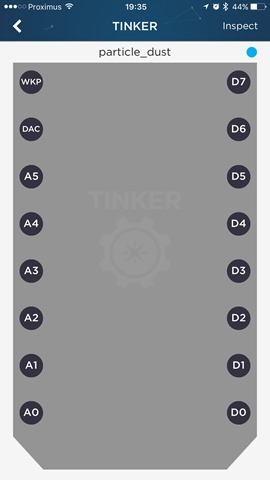 Without going into details here, know that there is an onboard LED connected to digital port D7. When you select D7, you will be asked what you want to do: 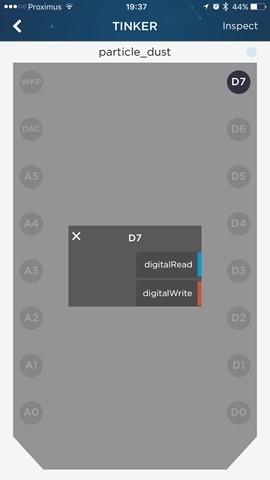 In this case, we want to turn on the onboard LED so we obviously want to write to the port. After selecting digitalWrite, you can select D7 to set the port HIGH (3.3V) or LOW (GND). When the port is set to HIGH, the on-board LED will light up in blue. Cool no? Although not very useful, you have now configured the Photon to connect to the Particle back-end in the cloud and you can use their app to control the ports from the cloud as well.

Tinker works just a well with analogWrite. If you have an LED connected to D0, and a resistor from the other side of the LED to GND, you can send a value between 0 and 255 to the port which will light up the LED with varying brightness: 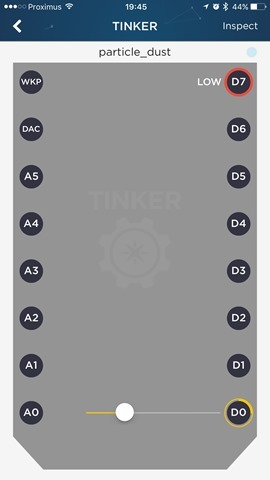 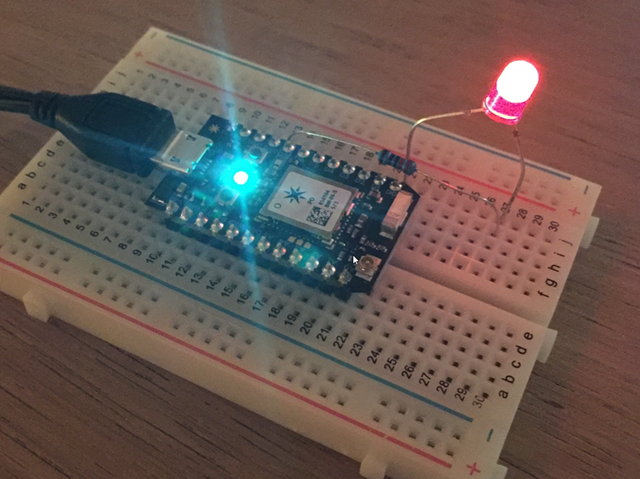 Note: D0-D7 are digital ports but D0~D3 may also be used as a PWM output (PWM = pulse width modulaton); that’s why you can send values ranging from 0 to 255 to those ports as well (analogWrite)

Particle has gone out of its way to make it as easy as possible to get started. Setting up the device is super simple and getting started with the built-in Tinker firmware makes it easier for beginners to understand how to use the ports without having to start coding. In follow-up posts, we’ll have a look at some of the cloud functionality and we’ll connect some more useful sensors like a photoresistor and a PIR sensor… Stay tuned!!!